Cole and I both ran a Hospital Hill Run a couple of weekends ago. I had a good race, he had a great one, and they were both hot!

Cole went first on Friday night, in the UMKC School Of Medicine 5K. It’s a hilly course, with quite a bit of elevation gain in a loop. This was his first 5K, and he ran great. He’d come on some runs with me towards the end of soccer season, which had already given him a good fitness level. Plus being 12. I warmed him up with a lunge matrix and a slow jogged mile. Then I ran back to the top of the first hill on Gillham. He was running well, definitely in the first 50 or so, so I just hoped he would keep giving good effort and not fade. I had warned him not to worry about slowing on the first hill – just slow his effort to comfortably hard so he wouldn’t max out. Then I ran back to the finish and waited. He came in 49th overall with a 22:06, good for 4th in his 10-14 AG (another 12 y.o., and a 13 and 14 y.o. ran faster). It was hot and hilly – a sub 20:00 put you in the top ten!

Here’s a few of him flying along in his Skora Phase-X’s: 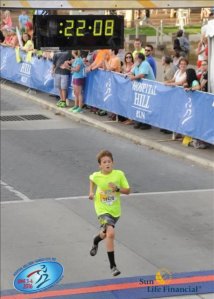 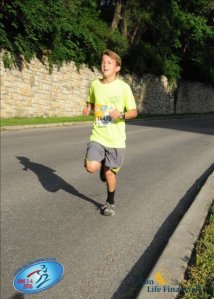 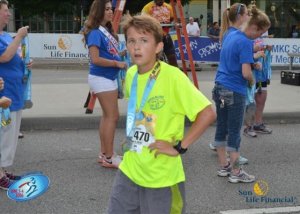 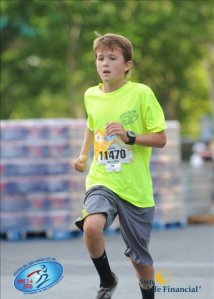 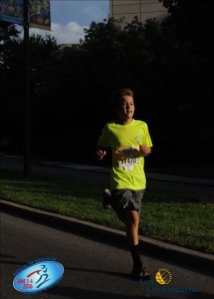 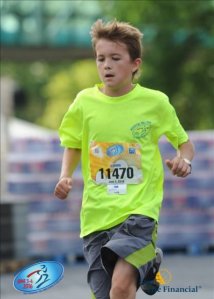 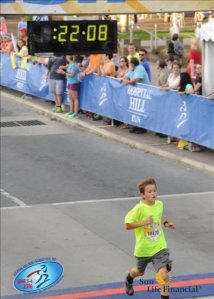 It was my turn on Saturday morning – a race that always challenges me, the Hospital Hill Half. My motto for this race has always been “sub 1:30 or bust,” and it’s always been “…or bust.” (See previous race reports involving beets, etc.). This year was no exception. I had raced a 5K and done a 10K time trial in the weeks leading up to HHR, so I had a pretty good idea of where my fitness was at. The race predictors said I could run a half in 1:32. But not necessarily this half… I’ve posted before on the wonky subject of adjusting times for course elevation and temperature and temperature (the main adjustments). I hadn’t bothered to “correct” my 5K but my 10K was on a track on a fairly cool morning – no excuses (or corrections) there. So, 1:32 was a reasonable target. It was warm (7:00am race start, 67F) so if you correct my result of 1:34:00 to take temperature out of the calculation, you get 1:32:44.7. The calculator assumes anything 60F or below is temperature-neutral, but like most people I prefer at least 50F or below for distance racing – that’s why most marathons are held in April and October. I could “correct” HHR’s hills out of the equation as well, but like I’ve said before, you can’t correct your way to a PR – I’m just making the point that my race predictors were pretty accurate to my adjusted time.

Despite knowing of the hills and the heat I’d be facing, I went out with the 1:30 pace group. When we got to the turn south to go down Oak just before mile 1, I felt like going out ahead of the 1:30 group to catch the 1:25 group. I knew this wouldn’t be sustainable, but Nelson had ditched the 1:30 group a couple of years ago and I wished I’d gone with him. After heading up Hospital Hill, I let the 1:25 group go.

The race’s theme this year was “Be A Hospital Hill Run Superhero!” so I threw on a cotton Flash shirt. Turns out tech fabric is only marginally less miserable than cotton when consistently wet. A little more thought went into selecting my black Skora Tempos, the lightest and most breathable shoe they make. 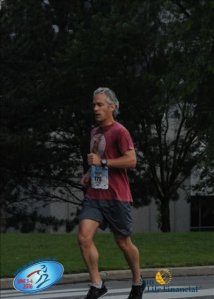 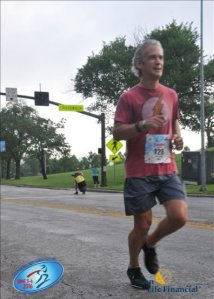 For much of the first half of the race, I managed to stay ahead of the 1:30 pace group and ran pretty much by myself. Apparently there were a few people behind me: 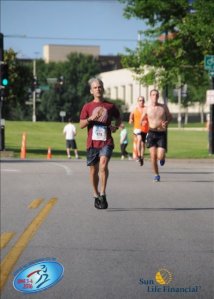 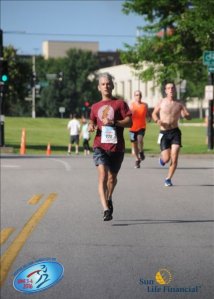 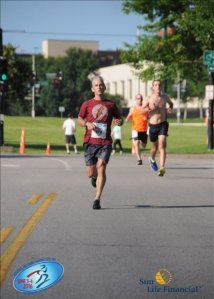 As I made the turn off onto Meyer, headed west for that short stretch, my pace was starting to slow. I think the lead pacer of the 1:30 group got ahead of me on Meyer. I managed to stay ahead of the tail pacer for the 1:30 group almost all the way to the Plaza. He had 2 or 3 runners with him, including the lead female. I heard him remark to the group “this guy went out with the 1:25 group” (ok, that is true, but only for a short stretch). I turned around and joked about it, and found out they were right on 1:32 pace. I ran with them through the Plaza and starting up the Broadway hill – somewhere on that hill I let them go. It was full sun – the first half of the course is pretty shaded – and getting really warm at this point. I was suffering and slowing my pace a bit, but I do like hills more than most, so I actually caught a few people on Broadway, which I think is the hardest part of the race. I did get passed by the second female, but I managed to keep her in sight most of the rest of the way. A kind and cheery race volunteer shouted some encouragement to me as I came up the hill – “You look great!” I replied, “Liar!” She immediately fired back a more accurate description of my perceived appearance, but this is a PG blog, so write your own punch line.

It got a little better after slogging up Trinity Hill – I was able to run pretty hard to the finish. 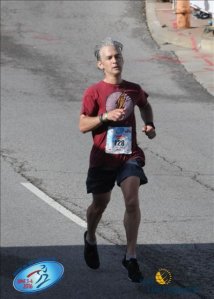 Given our human propensity to think in base 10 even when it’s not base 10 (time) it was kind of a bummer to see that I wasn’t going to come in under 1:34, but as it turns out: 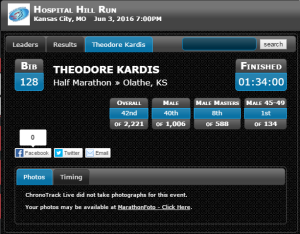 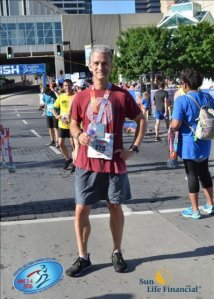 I’ll get you next year HHR!