I’ve been running in a pair of 1st Gen Altra Instincts since the first of the year. This is not a barefoot time of the year for me (frostbite anyone?) and I’m on the pavement when I’m not inside on the elliptical. I decided to give this a try while Altra was blowing them out the door for $60 as they rolled out the second generation of this shoe (currently being heavily advertised on ESPN, hopefully to good effect). I have read that the second gen is mainly a cosmetic redesign, and being a form over function kind of guy, saving $40 sealed the deal. Here they are:

The Birkenstock of minimalist running shoes, wouldn’t you say? Note the roomy toe box (a definite plus for the forefoot striker). Altra also recommends this funky lacing pattern. I have to agree that it locks it down where you want up top, without causing any unwanted pressure right above the toes. For some reason not all manufacturers are putting reflective material on their minimalist shoes. Altra realizes that some of us run when there is no sun! The upper seems nice and breathable – an airy mesh – however there is a suspicious crinkly plasticky sound – seems to be going away with break-in.

Here’s a side-view: zero-drop in case you missed it:

The sole is firm without being hard. Not very flexible. Definitely not cushy, and if “ground-feel” is your thing, this isn’t your shoe. Looks very durable though. Not a shoe you’re going to throw away after 100 miles. 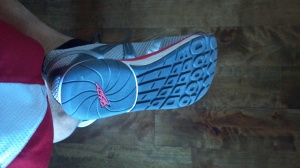 The bottom. I count 5 toes! Not articulated. This is no slipper and not a VFF competitor.

It comes with a heel lift you can insert under the insole if you’re new to forefoot striking. I eschewed it, being used to zero drop shoes. I transitioned though a couple of years ago, and easing into it did seem like a wise thing to do.

As I have stated as an aside in a previous post, I like the shoe but don’t love it. I run barefoot on grass enough that when I do hit the pavement in a shoe I am willing to sacrifice some durability for some flexibility and cush. This ain’t no racin’ shoe either. I don’t have a weight on it – I wear a size 12 anyway so it would be meaningless without a point of reference. It feels a bit heavier and clumsier than some of my other shoes e.g. the NB MR00. It’s a good durable trainer though if you need to or want to pound the pavement in a zero drop offering.