I ran the aptly named Psycho Wyco 50K this weekend at Wyandotte County Lake Park in Kansas City, Kansas. “Aptly named?” I offer this comment from a friend to a picture I posted to Facebook: “You are crazy.” No exclamation point, just a declaration. Hard to argue.

This was my first ultramarathon and my first Psycho Wyco. While I’d previously paced a 26.2+ distance, this was my first timed race entry for an ultra. I probably would have apologized more for calling this 50k an ultra (it is) having not run a 50m or 100m yet, but this was one tough 50k. I had some lofty goals for this race that were crushed by the weather. I can run this 10 mile trail loop in about 1:30 in decent conditions. I ran it in 1:37 in December’s Alternate Chili run, and that was with a slight amount of snow/ice on the ground. For the 50K, that’s three laps. I had aspirations of breaking the 5:00 mark. Spoiler alert: not even close. I was pleased with my overall place, 12th.

We had an ice storm the weekend before the race, followed by close to a foot of snow on the Tuesday before. The temps stayed arctic after that too. Very little melting. Yesterday, a local weatherman observed that we had gone 252 hours since we were last above freezing!

I did my typical low-residue diet the Friday before the race. That is, no fiber. Eggs, meat, carbs (I usually try to avoid refined sugars, but not pre-race), cheese, cream, etc. Worked like a charm. No porta-potty stops! My son had a soccer academy skills clinic on Friday night, and as I was messing around on Twitter during his practice, I saw Dr. Jordan Metzel @drjordanmetzl tweet that he was coming into town for Psycho Wyco with @RWGearGuy (Runner’s World Editor Jeff Dengate) and @JamieMetzl. I let Dr. Metzel know I appreciated his advice (he’s a triathlete and MD who regularly contributes to Runner’s World) and especially his excellent Iron Strength workout. I didn’t get a chance to meet Dr. Metzel at the race, but Jeff and I finished within 30 seconds of each other and traded congratulations at the finish line.

The night before, I re-screwed my Skora Forms (the screw heads were looking a bit worn after heavy use in recent weeks), assembled my gear, and hit the sack. I woke up around six and had some eggs, a double espresso with cream, and about 20 oz of this:

Hot hydration? You bet. If it’s hot out, you want a cold sports drink right? It’s delicious – actually flavored with apples and cinnamon!

Then it was off to the race. Great logistics. Close-in parking at start/finish line is limited, so a shuttle runs from a remote lot. It gave me a chance to do some final gearing up. I changed out of my Skora Cores and into my screwed Forms. The Form is my go-to trail shoe. Minimalist with just enough sole to keep you from getting beat to death on the rocks. I also slathered my face and hands with Alba Unpetroleum jelly (I had already covered my feet with it). Temperatures were just under 20F at race start, and only warmed into the mid-20s during the race, so I decided on a light-weight headband, a cold weather compression shirt, lightweight windbreaker running jacket, running tights, shorts, and toe-socks. I went with some glommits on my hands – rag wool – just picked them up the night before. I figured wool would stay warm better if I got them wet from putting a hand down in the snow, and they worked great.

Conditions were daunting as we waded out into the snow in the starting field. I had already mentally prepared myself for a slower and longer day than I had previously hoped for. Justin, a fellow runner I had met at my kids’ school a few months back (I introduced myself after noticing his Boston Marathon jacket) diffused any tension by coming up and saying hi before the start. We ran together for quite a bit of the first lap.

The trail wasn’t as chewed up during the first lap as it was on the second two. To put a finer point on it, the snow never packed. Ok, there was a stretch on a ridge where I thought I heard snow packing under my feet for a few seconds. Since it was so cold, the snow pretty much remained the consistency of sand the whole time. Hence, the title of this post. During the second and third loops, it really looked like sand for long stretches where the dirt had mixed in a bit.  The trail did clear a little bit in some places with all the traffic moving through, but I thought other spots actually become more difficult from getting all churned up.

Here’s a picture fairly soon after the start. I was moving as fast as possible, but I can’t disagree if you think I look like I’m walking (or if I have an “are we there yet” look on my face): 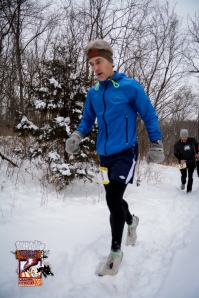 The next set of photos come from a really fun part of the trail – the “Triangle” – a single-track section with lots of switchbacks (other parts of the course are on a slightly wider “bridle trail” – btw the horses were smart enough to stay home). I actually enjoyed it the most the first time through when there was more snow: 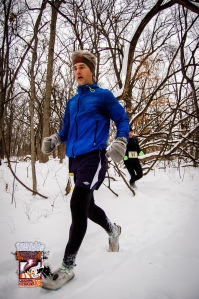 The first loop was also the most fun because there were still so many people running together. Most trail racers are pretty cool about yielding the trail if you want to pass, especially under these conditions. I passed and was passed, all without any hurt feelings.

The first time through, the biggest shock was how difficult it was to get up to the top of Dam Hill and onto the road up to the aid station. I slid back down twice before crawling onto the road. By the way, the course had excellent aid stations throughout – stocked with plenty of necessities and staffed by super-friendly and enthusiastic people, including my friend Darin Schneidewind – who I paced for the last 35 of the OT100 last November! For my part, I pretty much stuck to the sports drink and the gels. The Dam aid station had hot broth the last time through – that was GREAT! I had started asking for “something hot” as I finished the first loop, and people would give me coffee out of their thermos without hesitation. Just great.

Here’s a few shots from the Fester’s Wander section and coming down a big hill. This was probably the most treacherous hill on the course that day, which is why I again look like I am walking. I could see the skid marks of those who had gone before me. And maybe some blood. On the second lap I was running with a guy named Kevin, and we joked that we kept leapfrogging each other. He would fly down the hills and pass me, and I would crank up them and pass him back. So here’s that section:

I didn’t ask the photographer to focus on my Skora Forms, but this is a nice pic of the shoes.

Chasing up a hill!

Now for my two favorite pictures. It can be really hard to describe to people the pure joy I feel when running. I’m so thankful that I have the ability to do what I love. These two are worth at least a thousand words each:

I finished the first loop in 2:00:40.7, hoping as I came through the start/finish line that the course had gotten packed down a bit for the second loop. I didn’t find it to be any easier the second time through, and I couldn’t manage to pick up my pace any, falling off to 2:10:24.4. Perhaps if I had set a fallback goal ahead of time atm6 hours and figured out that pace I might have pushed harder, but as it was I was just enjoying the day as much as possible and not really looking at my watch. I knew I was going to be slower than I hoped. It was tough going, but I wasn’t really able to move quickly and productively enough that I was ever challenging my cardio except on the ups.

Perhaps the most exhilarating moment of the race was coming through the start/finish line at the end of the second lap. There were still a lot of people hanging around at that point waiting for people to come in from the 10 mile and 20 mile distances. I got some nice crowd support once they realized I was headed out for a third and final lap! That lap was pretty lonely, although I did come across a few racers. One guy was chatting with his significant other on a cell phone while keeping up a pretty good pace. Impressive! He described the snow as having the consistency of sugar. Agree. Another, Will, caught me in the last few miles. Making excuses for myself, I had developed one of those mysterious side stitches and just couldn’t knead it out. Will and I ran together for a while, but I knew he had me to the finish. Several of us finished pretty close to each other, and I did manage to gut it out and stay ahead of a few guys on my tail.

I’ll be back. Psycho Wyco was a blast, and I sure don’t like a course to get the better of me. Here’s the finish, with apologies to Ryan Hall: 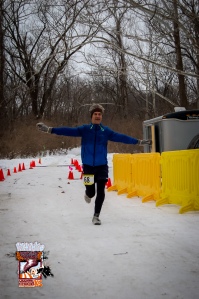 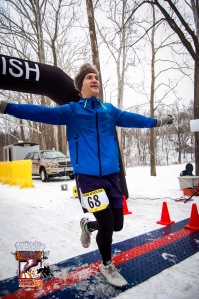