What’s the best way to purge a DNF from your memory? Get back out there and run another race.

My family and I traveled to St. Louis over the 4th of July weekend to help my parents celebrate their 50th wedding anniversary. Because we’re such an efficient family, we knocked out a birthday party for my nephew as well. Since I knew I was going to be out of town, I had scoped out some local races ahead of time and settled on the 31st Annual Firecracker Run, in O’Fallon, MO. The race was figuratively in my sister’s backyard (literally, it was in her front yard – I walked to it from her house). I signed up for the 10K – a 5K was also offered – that’s the longest distance you’re going to find this far south in the middle of a Midwestern summer.

After a 5 mile EZ run the morning of the day before the race, I went to watch another one of my nephews play baseball. Later that evening, after the party, he asked if I wanted to go on a run with him. How could I say no? We turned it into a nice EZ family group run; about 2 miles with me, him, his girlfriend, the RHSW, and my oldest two kids. We had three pairs of Skoras on that night run, including my kids in Phase-X (because, safety!). My nephew was really interested in my TEMPOs – he was amazed at how light they are.

Race morning, I got up around 5am in order to make it out to O’Fallon in time to get caffeinated and warm up. No beets this time. Just some water and coffee. I had a nice relaxing walk, about a half mile over the start/finish area while finishing my coffee. Then I warmed up for about twenty minutes and it was go-time.

The start wasn’t too bad – I managed not to get bogged down too much in the crush. I didn’t want to line up in front of the high school kids and embarrass myself – after all there was a fairly competitive 5K going on as well.

I had established an ambitious goal time – sub 40:00. Not too realistic, considering my total lack of 10K experience and my relative lack of 5K experience as well (with a 19:59 PR). I managed to hit that pace in the first mile, then leveled off to just over it for the second and third miles. However, in the 4th and 5th miles, I slowed a bit. I did get a boost from some volunteers around mile 4 – “hey, here comes someone our age!” After looking at my pace/elevation graph, the slowdown was during the uphill portion of the race. I kicked it in for the last 1.25 miles.

I was a little surprised at how quickly we spread out after I lost sight of the 5K pack. I passed some in the first few miles, and only got passed by two, if I remember correctly. I ended up running about 5-10 yards behind one guy most of the second half – I never could catch him, and we struck up a conversation afterwards. Hi Tim! Good luck with your full marathon this fall!

The race finishes in a fun way – inside a minor league stadium. You come in, run the warning track and finish around home plate. As I was entering the stadium, I heard another runner (5K) pay Tim and I an unintended compliment – “those guys are already finishing the 10K!”

I would have liked to get it under 41:00, but overall I was pretty happy with my race and pace. Placement is more about who shows up, but I did get a nice 2nd place “silver” medal for the M40-49 AG: 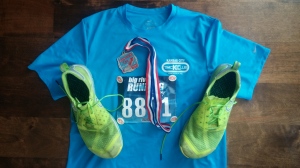 I ran in the Skora TEMPO. I like this shoe more every time I run in it. It’s light, but some cushioning that stood up to a hard pavement effort.

My time was good enough for 13th overall in the 10K, which had just under 400 runners. For some reason that’s a frequent overall placement for me. Just lucky I guess.

I was glad to get back out there and put up a good result after bombing out of the HHR in June. No beets this time!