With just over a month to go before this year’s Hospital Hill run, a 5K I ran yesterday (the LAKC 5K) reminded me what my personal answer to this question is: you should race to push yourself beyond your expectations.

For whatever reason, I’ve always been a runner that punches above my weight class when it comes to racing. What does that mixed metaphor mean, you ask? It means that I always seem to do a bit better on race day than my training times would predict. Why is that? A race is a competition, and competition brings out your best. The group dynamic of having others around you who are striving for the same thing is a powerful mental stimulus. As much as we tell ourselves, “I’m going to run my own race,” we cannot help but get caught up in the excitement of catching or not getting caught by those around us in a race. It doesn’t matter if they’re older, younger, etc. If they’re running around you, they’re the competition!

I ran a 5K yesterday as a tuneup race for Hospital Hill. Pro racers circle “A” races and “B” races on their calendar. A “B” race is a tuneup – a harder effort than a hard individual training run, but not all-out effort like a goal “A” race. Hospital Hill is the only “A” race I have on my calendar right now. As I return from injury (running well since February!) I have often questioned the state of my aerobic fitness. The only way to really find out is to go out and race a short distance, comparing it to past efforts. Then, you can use the results of that effort to predict a reasonable pace range for your goal race. There are many excellent race predictor calculators that will translate a shorter distance like a mile or a 5K into a predicted finish time for the gamut of race distances.

I didn’t go into this tuneup race completely blind – I took a look at some of my recent training runs and used a 25:00 tempo segment as a benchmark for my 5K pace. Based on that, I was hoping I’d get under 21:30 for the 5K, which is pretty far from my 5K PR. I don’t run a lot of 5Ks, and they are usually tuneup races rather than goal races, but I have done enough of them to have a frame of reference.

The competition effect was strong in this race. I found myself clustered in a group of three for most of the early part of the race, including someone I knew. That really helped keep the pace up during mile 2. Of the three of us, I was the midpoint of mile 3 – one guy dropped back and I stopped hearing footsteps behind me. The other guy pushed out ahead of me, giving me a rabbit to chase. There’s a good chance I wouldn’t have pushed as hard as I did without these two being close most of the race. The rabbit put in a kick – before I did, so I followed suit – knowing I wouldn’t catch him but not wanting to be caught by anyone else!

Afterwards, the guy who dropped back said he had noticed my Skora Phases and complimented my ability to run well in them. When people comment on my shoes, I reply that form follows function – I didn’t learn to run well in minimalist shoes. The shoes are designed for the purpose of running well, and their form is designed to that purpose. All I have to do is run naturally in them.

The end result was a minute faster than my goal: 20:29 (7th overall, 1st 45-49 AG). I’m really pleased with that in my first race back from injury and going into Hospital Hill. I’m sure I’m not in sub 1:30 shape (my ultimate half marathon goal, never yet achieved) but this 5K test is a clear indicator that I should try to go under 1:35 rather than 1:40, which was my original goal for the June race.

So, racing has pushed me beyond my expectations! Challenge yourself with a race! 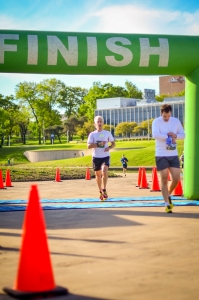 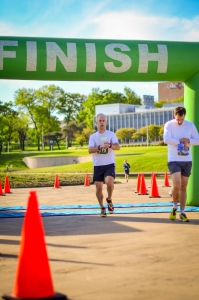