I’ve been quiet here for a few months while transitioning from Boston to an ultra mindset. Quiet no more – the Arkansas Traveler 100 is just over a month away!

My ultra training hasn’t been as consistent as I would like. I haven’t put in the volume I’d planned on over the summer, but I am confident that the work I’ve done is more than adequate to get me to the finish line. I’m approaching 1500 miles on the year, and barring injury I’ll easily make one of my goals – 2017 miles in 2017, which would be a PR. I have done a lot of trail running, some back to back long runs, and at least one 4 hour trail effort.

These final few weeks will be devoted to sorting out some final details, especially nutrition. I’ve pretty much got the gear part sorted out. I know which shorts and shirts have the least amount of chafing. I’ve settled on the shoes I’ll wear – Carson Footwear at the start: 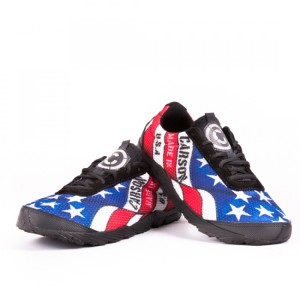 … and for as long as they remain comfortable. If (did I say “if”?) I start to blister or my feet swell, I will switch off to Topo Athletic’s Terraventure:

Both shoes have treated me well in training. I’ll have a few ICE (In Case of Emergency) shoes in the crew car if all else fails – Skora’s TEMPO:

…and a really beat up pair of the Mizuno Wave Evo Cursoris (a discontinued shoe, although a favorite of mine and the RHSW). Here they are in their younger days: 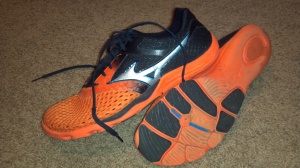 Well, they’re lighter now anyway. The Carsons fit most snugly so I’m going with them first. I figure if my feet swell I may need to move on. The Mizunos are the roomiest, so I’m not sure where to go from there if I can’t get them on!

I’ve been running with an Orange Mud HydraQuiver (single-barrel) for hydration:

It’s been great – posing no chafing issues on long runs – except for the one time I stupidly headed out with a singlet instead of a short-sleeved shirt. D’oh!

So, on to nutrition. If you’ve ever read one of my posts, you know I love to experiment on myself. I am frequently an N of 1 – a single participant trial. I’ve been reading and listening to what’s out there to inform my choices about what I am going to take in during the race, and I’ve pretty much made up my mind about what I intend to primarily rely on.

The primary source of information for my ultra training has been the excellent podcast of Shawn Bearden, PhD, Science of Ultra. Dr. Bearden has more bona fides than I’ll ever have!

One of Dr. Bearden’s podcasts featured the topic of gastrointestinal distress. Who wants to avoid GI distress?

Hermione does, and so do I. Dr. Bearden’s guest was Patrick Wilson, PhD – who in addition to that PhD in Kinesiology, is also a registered dietitian. So what did I glean from this chat? A disclaimer first – not all the information here is attributable to them, so they’re off the hook. For more disclaimers, read mine.

First, what not to eat during an ultra:

At least for the first two, that is an oversimplification, admittedly, but both of them make your tummy unhappy because they’re harder to digest than other food sources. Gas is a by-product of the digestive system breaking down fiber. You might not want a bowl of raisin bran with whole milk. Unless you’re trying to deter someone from following you too closely…

I’m not saying I won’t be tempted when I see some favorites at the aid stations. 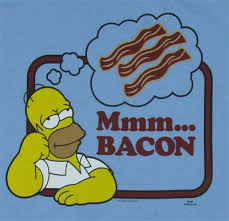 NSAIDs are a real no-no, though. I’M NOT JUST SHOUTING, NSAID IS AN ACRONYM for  non-steroidal anti-inflammatory drug. Ibuprofen (Advil, Motrin); naproxen sodium (Aleve); aspirin, and a host of other OTC and Rx meds. Not only are they strongly predictive of GI pain in persons engaging in endurance events, they can have even more serious side effects such as kidney and muscle damage. Are endurance events uncomfortable at times? Sure. But I question the wisdom of taking a painkiller to participate with an injury or simply to avoid discomfort. You might argue it’s a performance-enhancing drug – an unfair advantage over your competitors.

Ok, enough about what NOT to eat. What CAN I eat? What SHOULD I eat?

Let’s keep it simple. Or do I mean complex? Carbs. Carbs are the most easily digestible macro-nutrient, which means it’s the fastest way to get energy to your muscles. Carbs aren’t actually the most calorie-dense macro-nutrient. That honor goes to fat. I don’t really plan on ingesting much if any fat (unless I see bacon or donuts, or bacon-flavored donuts) but if my body is calling for more energy than I am putting in, it will start eating itself. Mostly fat, but muscle too if I’m not eating enough. I met a REALLY famous ultra-runner in person one time, and I was a bit surprised that he had a bit of a pooch. At the time I still had my race-weight marathoner blinders on, but now I think it might be a bit of an advantage to have just a few pounds of extra body fat at the start line of an ultra, especially if you have GI issues when trying to force down too many calories during a race.

Ah yes, back to carbs. I could just rely on simple sugars, e.g. sucrose (table sugar, which quickly breaks down into glucose and fructose, of which it is composed, approximately 50/50); or glucose (aka dextrose); or fructose. But each of these have their limitations. To keep it simple, I’m going to ignore sucrose; and refer to glucose as dextrose (since that is the commercially available powdered form of glucose, it is usually derived from corn).

The transporters that take dextrose and fructose across our digestive membranes into our bloodstream are different. However, they both have a maximum capacity. For dextrose, it’s typically 60g per hour. Anything more and you start to get that nauseous feeling. If you think you’ve never felt that, do you remember eating too much candy when you got home on Halloween? Yep, that’s why. However, completely independent of that pathway is the fructose transporter, which can handle 30g per hour.

You burn about 100 calories per mile. A “good” ultra pace – a sub 24 hour finish – requires just over 4 mph. 400 calories an hour is probably not realistic for most of us, gut-wise.

So, before I do the maths for that, one more issue to consider. Is dextrose, a simple sugar, best? Not really, for the concentration that would be necessary to push 60g per hour. It’s an osmolality issue, duh. Or is it osmolarity? It’s been a while since HS Chemistry (sorry Dad). Both are essentially a measure of  how much stuff is dissolved in a solution. If you go much higher than your typical sport-drink concentration (which only gives you about 140 calories of dextrose per 20 oz) digestion causes your body to pull resources from other places, defeating the purpose. 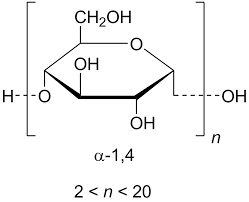 It’s a complex carbohydrate, a polysaccharide. The n in the diagram means the chains vary in length. The original gel manufacturer uses primarily maltodextrin, with some fructose. Another manufacturer makes claims about their pentasaccharide being special. Personally, I don’t like to pay for carbs + marketing. I will give these folks credit for following the science. I just didn’t want to pay $10/pound for it.

If you’re trying to do Whole 30 while running an ultra, sorry, maltodextrin is not for you. It’s a processed food. But that doesn’t make it evil. It’s a little like making oatmeal (but with corn starch). Add water, apply heat. Ok, you do have to add some enzymes or acids to break it down a bit more.

Maltodextrin’s advantage is that the body seems to tolerate it at higher concentrations in solution. To put it another way, your tummy feels a lot better if you throw 60g of maltodextrin in a solution with 16 oz of water than the same amount of dextrose. Maltodextrin uses the same transporter as dextrose though, so we’re still talking about a 60g max. 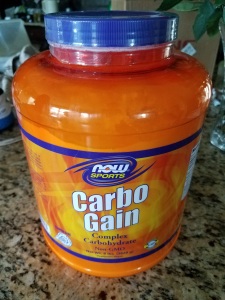 This being my first attempt at a 100 mile race, I’m more inclined to be a bit conservative and err on the side of fewer calories and less chance of GI distress. I don’t want to push my transporters too hard and find out my max was 55g for dextrose/maltodextrin and 25g for fructose.

So, I am going to experiment this month with the following solutes in solution with 16 oz of water (I may go up to 20 oz per hour if daytime temps get above 60F, a possibility):

One more additive: an electrolyte with flavor. I generally run fasted (for fat adaptation benefits). I’ve been using nuun electrolytes this summer ,and I quite enjoy the flavor they add, without the calories. The sample pack I bought included a flavor I liked that was discontinued (rats) but #2 would be:

The electrolytes include: sodium (bicarbonate + carbonate), potassium (bicarbonate), magnesium (sulfate), and calcium (carbonate). Some flavors have caffeine. I might try some of those. There are performance benefits (or detriments to not having it for a long time, for addicts like me).

So, I’m going to take that on a long run this weekend and see how it goes down.

The rest of my race day plan includes an hourly BCAA (Branched-Chain Amino Acids) capsule. I can’t produce these myself. But GU Roctane does.

Dr. Wilson had a few more tips I picked up from the podcast. Ginger can relieve stomach upset. I’ll look into that further. I mix ginger root powder and turmeric in milk as a drink on occasion, so I’m sure I’d tolerate it. But it’s a suspension, not a solution.

Dr. Wilson also suggests a probiotic may have some benefit leading up to your race. I eat yogurt and sauerkraut on occasion and I’m working on a jar of kimchi right now. I’ll emphasize those over the coming weeks.

I hope you managed to make it through this info-dense post! I like to organize my thoughts and plans into one place – so at least one person has benefitted 🙂