Since receiving the SKORA BASE to try out (gratis – thanks!/objectivity disclaimer) just under a month ago I’ve run in them 8 times and put about 90 miles on them. It’s an instant favorite – so much so that I’m considering running my 5th marathon in them, my return to the Heart of America Marathon on Labor Day in Columbia, MO. Quick tangent: the HOA has some great history as the 4th oldest marathon in the country. Hal Higdon won it in 1968 just after dropping out of the Olympic Trials. Easley Hill climbs 240 feet in less than a mile. By such objective measures – including elevation change and mean temperature – it might be one of the toughest road course marathons out there.

To me, the ultimate test of a shoe is its overall function during a long run – anything 16 miles or more. Does the shoe interfere or stay out of the way? If I’m not thinking about my shoes while running, that’s ideal. If I come out of a long run (especially with some goal pace miles in it) without having to stop to adjust the shoe, without any blisters, and without unusual aches or pains in recovery, that’s my definition of a shoe that functions properly. The BASE functions the way I want a shoe to function.

Because of my current racing goals I race on pavement. If I could race 26.2 miles through a lush field of grass, I wouldn’t wear any shoes. I haven’t found a marathon yet that’s billed as fast, flat, and well-irrigated. Thus, I think every minimalist runner is looking for the ideal level of cushioning. I do run barefoot fairly often – but (mostly) not on pavement. Concrete doesn’t really occur in nature – so I think you need some cushioning. On the other hand, you don’t want so much cushioning that you’re disconnected. I think the BASE strikes that balance effectively, especially for race tempo. In a recent training long run which included both pavement and a limestone gravel trail, I think the sweet spot surface for the BASE is gravel – but given the choice who would prefer pavement to gravel? I haven’t done a true trail run but I did try them on a surface generously described as grass (non-irrigated scrub over hard-packed clay) and loved their feel on that.

Personally, I’m a function over form guy when it comes to running shoes – but I still appreciate good design and execution. The level of material quality and design in the BASE is simply outstanding. The shoe is seriously cool in a purposeful way – there is nothing extraneous. I also like how the name is only found on the heel of the shoe. Where else would anyone need to look while you’re running in them? 🙂 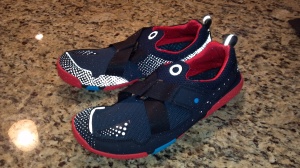 My personal preference on a shoe is laces. I will say that the BASE is the best-executed version of a bootie/Velcro closure/strap upper I have come across. 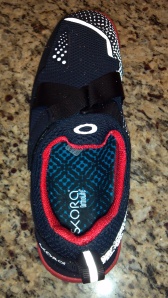 Fit is an important component in any shoe – the manufacturer has some limited control here and SKORA uses it to its advantage. A better way of putting it would be flexibility of fit. The criss-cross Velcro closures on the BASE combined with its snug but stretchy upper allow you to adjust the fit to your preference. It even has an adjustable band at the heel, although I haven’t had to futz with it since I haven’t experienced any heel slippage or tightness. The toe box is roomy enough without feeling like you’re in a cave. I really love how the BASE allows my toes to flex and spread while keeping the rest of my foot in the shoe.

As to the functionality of the BASE’s design, there are several elements I consider to be objectively superior to the design of some other minimalist shoes I’ve tried. The first is that the toe is slightly turned up. When running barefoot, no one is going to drive their toes straight into the ground – they’re slightly turned up so that the forefoot can make contact. I’ve run in some flat-footed minimalist shoes that I catch pavement heaves with – not a problem with the BASE. The BASE isn’t flat from side to side – and neither is your foot. The fancy term is that it allows for proprioception. In this context it means the shoe is letting your body do what it needs to do whilst running without interfering. If you’re thinking about it you’re not doing it – it’s unconscious. 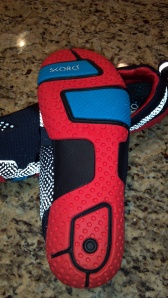 No one wants a shoe that’s going to fall apart in under 100 miles. I’ve had a few in my early minimalist days. The BASE is built to last. No discernible wear or construction issues at this point.

Believe it or not, I have several minimalist shoes that have zero reflective material on them. That’s just unacceptable. The BASE lights up like a Christmas tree at night. 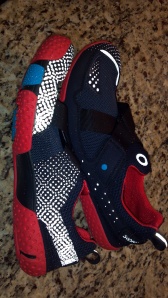 A good subjective test for a shoe is: given your available shoes in current rotation, do you find yourself gravitating to it? With the BASE, I do – it’s easily the best multi-purpose shoe in my closet right now. I’m as likely to put it on for a tempo run as a long run. I even wore it non-stop at Webelos Camp for 3 days where it proved to be an excellent trail hiking shoe. I know this is a purpose-built running shoe, but an added bonus is that it’s one of the most comfortable casual shoes I’ve had on my foot in recent memory.

Bottom line: if you are looking for a minimally-cushioned shoe that disappears on your foot – look no further.