I’m running the Edmonton Marathon this weekend (August, 2014). As the day approaches, I find myself going to the usual multiple locations to review my pre-race regimen. Then I thought to myself, “Self, you have a blog! Why not post it all in one place?” Unsurprisingly, I think that’s a great idea, so here it is.

I’ve used the so-called “Western Australian” carb-loading regimen for all but one of my eight marathons (the lone exception was my ketogenic marathon – check out my blog posts from last fall if you’re curious). Having never tried the traditional pasta-binge method, I don’t have a baseline, but I believe it accomplishes the two purposes which I consider the whole point of doing something different: (1) feeling fueled for the race; and (2) zero porta-potty stops during the race.

So first, what is it? It’s a method of carb-loading that aims to max out your glycogen stores in the minimum amount of time. Why? Well, when you’re tapering, if you up your carb intake for several days, your body is just going to turn those unburned carbs into fat. How do you do it? Basically, you do a short, near-max effort workout 24 hours before your race. This primes your body to start producing glycogen when you feed it carbs. So, then you cram down a bunch of carbs beginning right after you finish the workout. Here’s a link to an abstract of the study:

I’m not a cyclist (that’s not out of context if you clicked the link) but many have applied this to marathon carb-loading. So here’s what I do:

Ideally, 24 hours pre-race. Start with a brief warmup (I usually do about a ½ mile); then 2 ½ minutes at hard effort (roughly your 1-mile pace); then a 30 second all out sprint. That’s it. Commence carb loading. Coach Kyle  suggested a slightly longer warmup of 1-2 easy miles; and a 1-2 mile cooldown. I’ll probably look to stay on the 1 mile side of both of those.

The general formula for how many carbs you need for your body weight is “Consume 12 grams of carbs for every kilo of lean body mass spread over the next 24 hours.” That’s actually more complicated than it sounds. “Lean body mass” isn’t just your mass (what most of us call “weight”) it’s your mass  that isn’t fat. So… what you need to do is figure out your percent body fat and subtract that percentage from your total mass to get your lean body mass. For example, if you have 10% body fat, your lean body mass is 90% of your total body mass. Figuring out your body fat % is beyond the scope of this blog post, but there are ways to estimate it (pinching yourself, calipers, electrical currents) as well as accurately measure it (submersion in water is involved). Using myself as a simple example, if I weigh 165 pounds with 10% body fat, I weigh 75 kilos, of which 67.5 kilos is lean body mass. So, I need 810 g of carbs in the 24 hours before the race. It’s actually pretty hard to cram that many carbs down. Here’s how I do it.

This recipe is based on Gatorade G Series Pro 01 Prime Carb Energy Drink; 82g carbs, 330 cal. per 12 oz.   However, the G doesn’t supply potassium. I added that. Their newer Endurance formula does, but it’s an on course formulation, not a pre-load. I have my own recipe for that in a previous post (here: MEFF72) but in order to achieve the higher concentration of sugar, you’d have to use the powdered formula and add more scoops than it calls for. Sounds salty, which you don’t really need when you’re pre-loading. Anyhow, for the same level of carbs/calories as the Carb Energy Drink, you need 20.5 tsp of dextrose or sucrose for each 12 oz. serving. Feel free to check my math. I’m not a chemistry teacher but my dad is. No, we never had a meth lab in the basement.

Tip: Sugar goes into solution easier if you use hot water from the tap. Then chill. Unless you like things that are warm and sickly sweet.

Dextrose (sold as corn sugar) and sucrose are very similar chemically. Dextrose is as simple as it gets. One sugar molecule, it’s the same as glucose – blood sugar. Don’t let that gross you out though, it’s plant-based, usually made from corn. However, it’s not simply extracted, it has to be produced from a starch, usually corn – by an enzymatic process. Sucrose (what you get when you buy table sugar at the store) is a glucose molecule connected to a fructose molecule, but still considered a simple sugar. It’s also plant-based, usually extracted from sugar cane or sugar beets, via a more natural process.

I’ve still got some dextrose left over from the last time I did this: 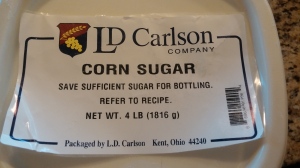 As you can see, homebrew folks are the main consumers for this. I bought it at a local homebrew store. Of course you can easily find it on the interwebs as well, but typically you’re not going to find it in your local grocery store.

It takes the body a bit longer to metabolize sucrose, which I suppose is why I settled on dextrose. However, this time around I think I am going to experiment with sucrose, to try to slightly even out the blood sugar spikes. I’m also going to try to drink smaller amounts more frequently instead of pounding 12 oz. every hour or hour and a half or so. For future reference though, I think the use of dextrose on course is probably the way to go. By the way, Smarties candies are almost 100% dextrose, ok, a little food coloring and citric acid. Probably the fastest sugar hit you can get.

[September 2016 EDIT: Recently, my thinking on sucrose and especially its fructose molecule has continued to evolve. While I have settled for sucrose a few times when I didn’t have dextrose, or enough of it handy, I think I will stay away from it while carb loading given the slower liver metabolism. I’ll be doing some additional research on this, but I am concerned that the liver metabolism pathway that leads to fat production may not be getting as much to glycogen stores as dextrose/glucose. So, I’ll deal with the blood sugar spike of the dextrose in favor of more glycogen – at least that is my hypothesis right now.]

As to salt, as I said I toss in some potassium chloride. You can buy this stuff anywhere – it’s marketed as a salt substitute for people on a low or no sodium diet. 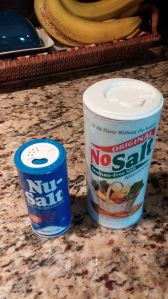 Bananas sold separately. I think “No Salt” is a stupid name, since potassium chloride is “a” salt. It’s just not “the” salt – sodium chloride.

Finally, there’s really no performance reason to throw in lime juice, I just do it for taste. It makes it taste a little better. You could use lemon juice. If you decide to leave it out, just remember to replace the fluid with water, or your solution will be even more concentrated. You could add in some of those water flavoring packets I suppose, but that stuff is nasty. I prefer the more natural taste of lime juice, specifically key lime juice – this is the best: 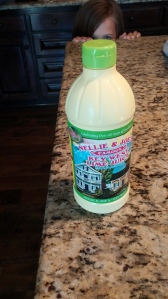 Photobomb courtesy of my son, Cole.

I know this recipe isn’t going to be featured on the Food Network any time soon, but it gets the job done. As you know realize, this is 8 servings worth and it still doesn’t get me all the way to my target of 810 grams of carbs, so you’re drinking a lot during the day.

What else do I eat during the 24 hours prior?

I follow a low-residue aka low-fiber diet during the last 24 hours. The purpose of that is to make sure my GI tract is as empty as possible when the gun goes off. If you haven’t run across the pictures of people who don’t do this, I don’t recommend you go looking for them. Eww. I think this is the way to go. Don’t even think about an enema, I don’t speak from personal experience but I’ve read they are dehydrating, which is not really the direction you want to go a couple of hours before your race.

My typical race day minus one diet is 3 eggs at each meal – breakfast, lunch, dinner. Usually with cheese, for a little fat. Meat is pretty low-residue but not totally devoid of fiber, so I stay away. Full fat Greek yogurt if available, with honey. Some ice cream for dessert at dinner, topped with maple syrup. Certainly no fruits, vegetables, grains.

The morning of a race I will eat three more eggs just to have something on my stomach. Then I’ll put down one more serving of the carb-loading drink, about 300 calories worth, two hours before the gun, if possible, to avoid the blood sugar spike. If you can’t do that, just really nurse it. Once you get into the ten minute window before the gun, you can do a gel if you can stomach it. I’m going to use a product Coach Kyle recommended for my on course fueling – again, I’m going to nurse it instead of trying to gag it all down at once. I practiced this on a long run recently and it’s pretty tasty as far as I’m concerned. going slow is also a good reason because the really high sugar concentration in gels and the like is a little hard to get down without coughing unless you take it easy.

Here’s the magic potion for this race, in a nice little bottle that fits your palm pretty well: 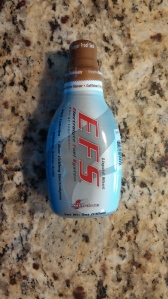 Here goes! Off to the Great White North in less than 24 hours!

7 comments on “What (Not) To Eat Before A Marathon”